We are proudly the Best Bullion Buyer of West Phoenix, Avondale, Tolleson and surrounding areas.  West Valley Pawn & Gold offers appraisals free of charge, that turn into the highest cash payouts for you gold, silver or platinum bullion.

Bullion is any form of gold, silver or platinum in various bulk forms.  Most bullion is melted down and recast in different shapes, forms and sizes.  These precious metals are processed by the private mints, most struck with their weight, that is measured by gram, ounce and kilograms by the market.  In addition they are struck with their purity, which is 95% - 99.9% pure of the precious metal and the logo from the private mint company that made it.

Because it is bullion, it's value is measured by the weight, purity, and the spot price of the precious metal it is made of.  Unlike coins in currency, which are struck with a face value and are more of a mixture of alloys.  However, there are bullion rounds that are minted and proofed to resemble coins used as currency.  Although, their value exceeds the face value of the actual coin.

The most significant thing about platinum, is that its value is higher than gold.  As a matter of fact, platinum is the "white gold" in lay man's terms.   It is so malleable, that it can be pounded into a sheet as thin as 100 atoms.  In addition, it's rarity exceeds that of gold, which is a main reason it is considered more valuable.

Gold Bullion comes in many different forms.  From gold bars, ingots, nuggets, troy ounces, nuggets, scrap, jewelry and coins.  Gold has always attracted attention, and been considered a sign of nobility, since the beginning of time.  In addition, gold is the first precious metal that comes to mind for most, that symbolizes wealth.

The most Popular Gold Bullion: 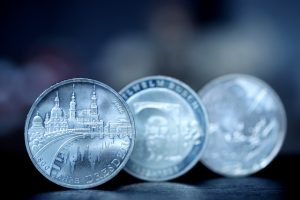 We take most minted stamped silver bullion. Including, but not limited to Engelhard, Johnson Matthey, Pan American, Pamp Suisse, and Sunshine. We are in a position to buy or sell Silver. We are also able to offer Cash For Silver on the spot. Our buying ability includes silver items such as:

Silver bullion varies from .995 to .999 purity and comes in three basic forms.  They are coins, rounds and bars.

The most popular Silver Bullion Rounds are:

The most important thing a bullion buyer values is to consistently have accurate appraisals.  That is why we have the most advanced technologies for measuring platinum, gold and silver purity.  Therefore, we have the Sigma Metalytics to test bullion's bulk forms.  In less than a minute it analyzes a metal's purity with electromagnetic waves. Next, we put it on the scale to weigh it.  After that, the spot price is checked, to calculate the highest payout possible and presented to you as an offer.

We loan on anything of value. ANYTHING!

We buy and loan on anything of value. Our professional staff is determined to give you the most cash for all of your valuables.

We pay the most cash for gold. Because we specialize in buying and loaning on gold, silver & platinum jewelry. We take all types of gold items from 10k - 24k.

West Valley Pawn can either offer you an auto title loan through Phoenix Title Loans, LLC where you keep your vehicle to drive it. Or if you prefer, we can store your car, boat, RV, or ATV in our secured lot during the term of the loan.

Use your auto title as collateral for a loan. We give loans on cars, motorcycles, RVs, ATVs, boats, tractors, jet-skis, and anything else you can ride or drive.